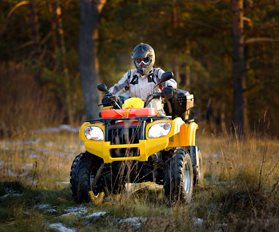 It may seem like an adventure to drive a motorized vehicle, but children are not allowed to drive cars.  Automobiles are not allowed to be driven by an inexperienced driver, and it is illegal to travel in a car without a seatbelt.  Some children, however, do go out and drive or ride on all-terrain vehicles (ATVs).  ATVs are designed for off-road terrain, not paved surfaces.  They are difficult to control on paved roads and are at risk of flipping over , hitting cars or being struck by cars.  Driving on lawns, dirt roads, and in woods may sound like fun, but it can be very dangerous.  ATVs do not have as many safety features as cars, and there are fewer rules for driving ATVs than there are for driving a car..

Injuries commonly seen from ATVs include eye injuries, minor scrapes and bruises, broken bones, head injuries, spine injuries, and death.  ATVs became popular in the 1980s and were often sold as toys.  Quickly, people realized that they were dangerous.  The Consumer Product Safety Commission (CPSC) reported that there were over 100,000 injuries from ATV’s in 2012 (about 25% involved kids under 16).  The CPSC also reported that an average of 568 adults and 144 children died each year between 2001-2008.  One out of every five deaths occurred when there was more than one rider on the ATV. 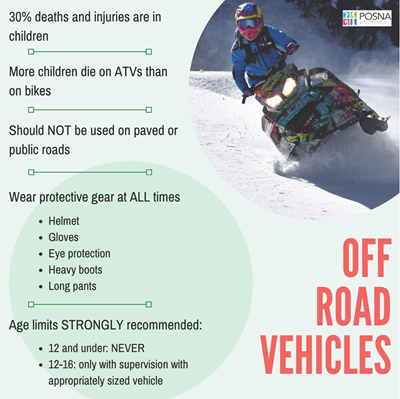 What can you do to make riding an ATV safer?

Q:  What features of an ATV should make me concerned for my child?

Q:  Are there ways to make ATV operation safer for my child?

Q:  Where and when should my child be permitted to ride his ATV?