The back is normally curved when viewed from the side. The upper back curves outward and the lower back curves inward.  In some cases, the spine may be too prominent or rounded.  This is abnormal kyphosis. 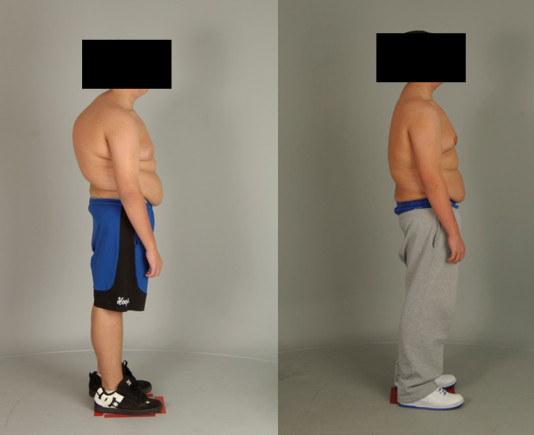 Patient with Scheuermann’s Kyphosis before (a) and after surgical correction (b). Images courtesy of Pat Cahill, MD, Shriners Hospitals for Children, Philadelphia.

Kyphosis may be noted on a screening exam at school.  Someone may notice that the spine looks hunched over or humped.  The rounded back may be of cosmetic concern to patients and/or families.

Some patients with kyphosis complain of back pain, however, many patients have no pain. Rarely do kyphosis patients have numbness, tingling, leg weakness, difficulty walking, or incontinence.

Your child’s doctor will perform a screening examination and evaluate his or her back.

X-rays:  If necessary, your doctor may order x-ray to evaluate the spine.  Kyphosis of greater than 50 degrees in a child or adolescent is considered abnormal.

CT or MRI:  A CT or MRI scan is not commonly needed to evaluate kyphosis.  However, in certain cases your doctor may recommend these tests.

Postural Kyphosis
This is an increased but flexible rounding of the spine. It may be due to poor posture. It becomes most noticeable during adolescence.  Girls get this more often than boys.  It is not usually painful.

Postural kyphosis may be treated with physical therapy or exercise to improve strength and posture. It does not usually cause problems later in life. 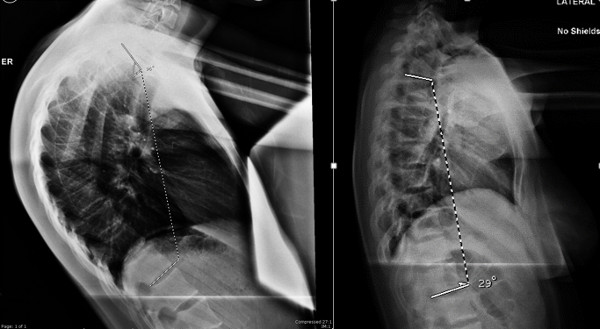 Left image shows vertebral wedging of Scheurmann’s Kyphosis. There are 5 – 10 vertebrae that are wedged. Right image shows a spine without kyphosis.
Scheuermann’s Kyphosis
This type of kyphosis is caused by wedge shaped spine bones (vertebrae).   It is usually seen in the upper or middle spine. This curve is often bigger than with postural kyphosis.   Scheuermann’s kyphosis often appears during adolescence.   There may be back pain at the apex of the curve. It is more common in boys than girls.

This may be treated initially with exercises, physical therapy and anti-inflammatory medication to control pain.  Sometimes doctors recommend bracing.  In severe cases (curves larger than 75 degrees), surgical correction may be considered. Surgery can decrease the rounding of the spine by fusing the abnormal segments into a straighter position.

In congenital kyphosis, the spinal column did not form normally before birth.  Some vertebrae may be abnormally formed or fused together. This can cause a progressive kyphosis as the child grows.

This type of kyphosis may require periodic check-ups by your doctor.  Surgery may be recommended at a young age to correct the position of the spine and prevent progressive deformity.  Without treatment, some forms of congenital kyphosis can lead to severe deformity and neurologic problems.

Q:  What is kyphosis?

Kyphosis refers to excess rounding of the back.  The back may appear hunched or bent forward.

As your child grows, you may notice an increase in the rounding of his/her back, or curvature may be noticed on a screening exam at school. Your child may complain of back pain.  Your doctor can determine whether referral to a pediatric orthopaedist is needed.

Q:  How is kyphosis diagnosed?

Your child’s doctor will examine and possibly x-ray your child’s back. Kyphosis of more than 50 degrees is considered too much.

Q:  Are there different types of kyphosis? How are they treated?

Yes, there are different types. Postural kyphosis is an increased but flexible curve of the back.  This may be treated with exercises.  It does not usually cause pain or other problems.
Scheuermann’s Kyphosis is caused by abnormally shaped spine bones (vertebrae).  It may cause pain. This is initially treated with anti-inflammatories and exercises.  It may require surgery in severe cases.  Postural and Scheuermann’s kyphosis are usually noted in adolescence.  Congenital kyphosis is caused by abnormal development of the spine before birth.  It may cause progressive spine curvature as the child grows. This may require early surgery.