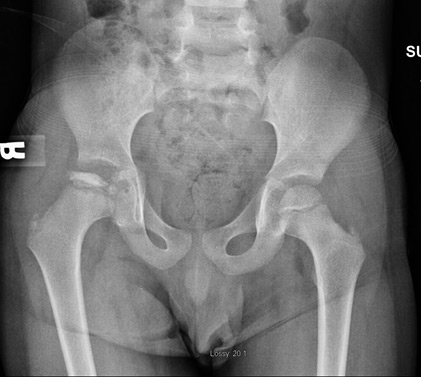 Legg-Calve-Perthes Disease, sometimes just called Perthes Disease, is a childhood condition that affects the hip joint.  Blood flow to the hip doesn’t get to the ball of the ball and socket joint.  This causes structural damage to the ball. Perthes Disease occurs in several stages, often over the course of 1-2 years. Perthes is much more common in boys, and occurs in both hips only about 10% of the time; both hips are never in the same stage. Perthes usually occurs in patients 4 to 10 years old.

The usual presenting symptom is a limp. This may be accompanied by pain, not just in the hip but also the knee, groin, or thigh. There may be stiffness in the affected hip (less motion than in the other hip).

Your child’s doctor will examine your child’s hips, checking the range of motion and looking for differences between the two hips, as well as any discomfort. Often the child’s walking pattern will be observed. The diagnosis of Perthes Disease is usually made with x-rays; over the course of your child’s treatment, several x-rays will be taken to monitor treatment. These may look worse before they look better—this is often how the disease progresses. In some cases advanced imaging such as MRI may be needed.

Treatment of Perthes Disease is based on the age of the child and the severity of the disease. Very young children with few changes on their x-rays may require observation only. In all cases, children will be monitored with repeat x-rays for several years at least.

Medication may be used to help with swelling in the hip joint. Physical therapy may be ordered to keep the hip moving.  Sometimes the family may be instructed in how to do these exercises at home as well as in the office with a physical therapist.  In some cases, bracing or casting may be used to hold the affected hip in a good position (keep the ball in the socket). Often the cast is put on the in operating room; your child’s doctor may inject some dye into the hip joint in order to assess the range of motion and proper placement. In some cases, the groin muscles become tight, limiting proper positioning; in these cases, a small incision is made to release the tightened muscle and get the hip into better position. After about 6 weeks, the cast is removed and exercises are started again. Your child’s doctor may recommend a brace for part of the day to keep the hip in a good position.

In more severe cases and/or in the older child, surgery may be needed to place the ball into the socket of the hip joint. Sometimes this involves cutting the femur (thigh bone) or the pelvis, and sometimes, both. A metal plate and screws may be used to hold everything in place. Often the child is placed into a cast for about 6 weeks after surgery; after the cast is removed, physical therapy is started.

Most children with Perthes Disease do well and return to normal activity.  Having a ball which is not round can lead to arthritis of that hip joint as an adult.  The outcome is better with younger children and in hips that keep all of their movement.  In some severe cases, in which the round shape of the head of the femur (ball of the ball-and-socket) cannot be maintained, pain may develop as a teenager, requiring further treatment.

Q:  What is Perthes Disease?

Perthes is a childhood condition in which limited blood flow to the femoral head, the ball of the ball-and-socket hip joint, causes damage and collapse.


Q:  Who gets Perthes Disease?

Most patients are between 4 and 10 years old. This is 5 times more common in boys than girls.

We are not certain what causes many cases of Perthes. There may be certain genetic factors, but this is still under investigation.


Q:  How can I tell if my child has Perthes Disease?

The most common symptom is a limp. This may or may not be painful. Your child’s doctor can evaluate a limping child and help to determine what is causing the limp. The diagnosis of Perthes Disease is usually made with x-rays, and requires consultation with a pediatric orthopedist.


Q:  How is Perthes treated?

This depends on the age of the child and the severity of the disease. Young children with a mild condition may need observation only. Some patients will need physical therapy to keep the hip moving. More severe cases may require placement into a cast or brace; the most severe cases may require surgery on the hip to restore the ball-and-socket shape and position.


Q:  What is the prognosis for Perthes Disease?

Overall most children do well, although treatment of the disease may last for a year or two. Older children, girls, and children with limited motion in the affected hip may not do as well. Patients who have had Perthes Disease may develop early adult arthritis. In some severe cases of Perthes Disease in which the shape of the hip joint is not maintained, patients may have pain or limited motion as teenagers and require further treatment.


Q:  Will my child be able to play sports with Perthes Disease?

At the conclusion of treatment most patients will be able to play sports. Your child’s doctor may keep him/her out of sports while the hip is healing.